With the approval of the Renewable Net Metering Agreement in July, 2010, Traverse City Light & Power opened the door for residential renewable energy systems that are 20kW or smaller to interconnect to the TCLP electrical grid.

Peter and Sharon Moller, soon-to-be Traverse City transplants from Colorado with experience in renewable energy systems, broke ground on the residential partnership with TCLP with the installation of a solar system in October.

“Our motivation to install a solar system stems from a long-held belief in renewable energy,” said Peter Moller. “One need only look at the path our nation has been taking regarding energy to recognize that it is not sustainable for this planet, including our children’s future.”

With a background in thermal, oil-based and water-based energy systems, Moller turned his attention towards the electrical aspects of solar for this new endeavor. Their home will be heated using a geothermal system: a clean, efficient form of thermal energy. The electrical demand of the required heat pump will be met using their photovoltaic (PV) solar system.

TCLP’s newly approved Renewable Net Metering Agreement was incentive enough to pursue the opportunity to install a PV system for Moller. With the new policy in effect, electricity generated by these renewable energy systems that is not consumed by the rate-payer is sent to the grid to be purchased by TCLP for the same rate at which the electricity is sold to the consumer.

Moller’s 3.52kW solar array will bank credits with TCLP during the spring, summer and fall. When his geothermal heat pump requires large amounts of electricity during the winter months, Moller can utilize those credits with the utility company. 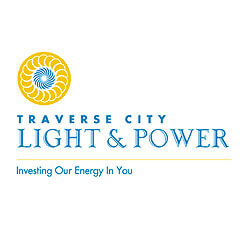 In order to finalize this new partnership, the legal details of the agreement had to be vetted. Moller, along with Eco-Building Products’ project manager Jim Barnes, read through and negotiated the terms of the TCLP Renewable Net Metering Agreement to pave the way for a fair partnership for future residents.

“The agreement was well written and in most cases favored the utility, as all agreements written by legal counsel should be,” said Barnes. “For close to a week, we read through and discussed each detail of the agreement. There were a few sections of the agreement that Peter requested revisions to, and Traverse City Light & Power was very receptive, agreeing to the revisions and making it easy to sign. Peter broke a trail for future TCLP rate payers to follow.”

“TCLP should be congratulated for approving and providing grid-tie interconnection to all of its rate payers who choose to utilize clean energy systems,” said Barnes. “Off-grid systems require expensive, heavy-maintenance battery back-ups. Having an electrical grid accessible will make energy systems much more affordable and easier to install and maintain. I expect that many TCLP rate-payers will follow Moller’s path by installing their own grid-tied solar systems.”

Moller echoed his sentiments and is optimistic that more residents will realize the advantages of renewable energy, both environmentally and economically.

“I hope that other folks installing PV systems in Traverse City will recognize that grid-tying their system with TCLP will be an incentive that makes the investment in solar more economical in the long run,” said Moller. “As the demand for power continues to grow, hopefully the utilities will also recognize that they too benefit from such an arrangement.”

Moller’s collaboration with TCLP, Eco-Building Products and J.D. Stratton created an environment for success with the utilization of their knowledge and accessibility throughout the process.

“I was impressed that Jim worked in helping us to meet our goals, especially in presenting a variety of alternatives to consider, responding to my questions and concerns, and taking the initiative to measure the actual space available for panels on the garage before too many panels were ordered,” said Moller. “Jeff Stratton (of J.D. Stratton) was also very helpful on the last day in addressing our concerns.”

Barnes suggests that residential grid-tie interconnection and net metering is just a first step for TCLP.

“FITs benefit both parties,” said Barnes. “The utility benefits with the utilization of green, clean energy to meet renewable energy objectives without undertaking its own monumental wind, solar or biomass construction projects. No major investment is required, nor is there any hassle with managing a major construction project,” he said.

The rate payer benefits because he or she can produce his or her own clean energy, pay off the system in a short period of time and then have free electricity from that point forward.

FIT programs mandated by federal governments or voluntarily offered by progressive utilities have proven to be positive tools for economic development and for improving air and water quality. Communities like Ontario, Canada and countries like Germany, both of which share similar peak sun-hours to the Grand Traverse region, have adopted FIT programs and their PV industry is thriving.

“FITs promote a healthy and happy lifestyle that the Grand Traverse region appreciates and yearns for,” said Barnes. “If TCLP rate payers could realize a reasonable return-on-investment in a solar system that offsets all or part of their electrical demand from fossil fuel generated electricity, they might make the investment and opt to improve the world for future generations.”

Eco Building Products was established in 2006. Since then, we have grown to accommodate do-it-yourselfers, contractors, architects, designers, etc.. Our products are filtered by our Green, Greener, Greenest policy. We have the knowledge to help you with your building supply needs.